Sometimes the light’s just shinin’ on me,
Other times, I can barely see,
Lately it occurs to me,
What a long, strange trip it’s been. . .  —  Grateful Dead, Truckin’

When my former supervisor said goodbye to me, she quoted the above song.

What a long, strange trip it’s been.

It’s become a bit of a colloquialism, that line.  I’m not sure she ever knew I’d been a Dead Head all those years ago, or even that she was quoting Jerry Berry.

Either way, the words resonated and resounded, like a song at the end of a movie that swells and echoes and means something really important.

Did you ever notice what a huge part of our identity work is?

After the last scene of my last day at my old job, and after the credits ran, I was left sitting in a dark theater.

Wondering who I was now that the movie that was my life for 12 years was over.

I was still a collector of Buddhas, fan of Himalayan Mountain disaster stories, and lover of butterflies.  I still had my enormous credit card debt.  I still wore jasmine oil and changed into my pajamas the second I returned to the house after my day, even if it was only 5:30. I still disliked Adele (with a passion) and couldn’t stand Downton Abbey (vehemently!).

I was still all the things that made me ME. . .

But a big chunk of something about me was missing.

I felt like Marty McFly in Back to the Future, when he looked at the photo and realized his family and he were vaporizing right before his eyes because he’d altered the course of history.

I guess I didn’t realize it would be so hard.  Change is hard, even positive change.

With my new coworkers, I was a brighter, smilier version of myself.  I was super positive. I was like the new kid who came into a class midway through the year and was DESPERATE to be liked, DESPERATE to fit in, DESPERATE to be a part of the jokes and not the butt of them.

I thought I knew myself.  I’d known exactly who I was among my old colleagues–  the overworked, overwrought social worker with a streak of black humor and a heart of. . .  well maybe not gold. . .  let’s say sterling?  I wasn’t afraid to speak my mind or express my opinions.  I was confident in my clinical skills.

Among my new team I didn’t know who the hell I was.  I was this awkward, new girl who kept mostly to her own office, and didn’t have anyone to eat with at lunchtime.  I was the only person in the office wearing makeup.  Should I wash it off?  I wondered in a fit of that desperation to fit in.

Having an identity crisis midway through a pretty well settled life was particularly daunting.  It was a surprise.  And yeah, man, trippy as hell.

I actually went to Apple Music and listened to Truckin’ by the Dead, as though maybe it contained some secret solution to my situation.

It was sadly disappointing.

But up came another song, Box of Rain.  I had not heard that song in possibly a decade or more.  The last couple lines caught my attention:

Well it’s just a box of rain
or a ribbon for your hair,
such a long, long time to be gone
and a short time to be there.

Who the hell knows what those stoners really meant by those lyrics, but at that moment, what it meant to me was that everything is fleeting, time is an illusion, and when you look back on stuff it justifies itself into a neat little package that makes sense.

In keeping with this week’s theme of awkward and painful family issues at the holiday, I am re-sharing this post which I originally published on Momaste last year..  It is a post that is very raw and important to me. . .  so as always, I would greatly appreciate your feedback and comment-love.  xo, CJP. 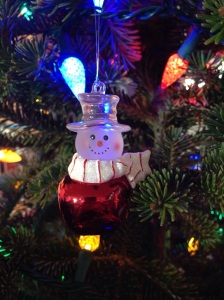 Every time I hear a tune from the Muppets Christmas album with John Denver, I remember those cold drives up over the Berkshires in my father’s VW van.

There was no heat or seat belts in the old thing.

My brother and I would curl up under piles of blankets in the back, or fight to sit in the front seat where a tiny trickle of heat flowed from a dusty vent. We were very small, maybe seven and five, but back then there were no laws about seat belts or how old you had to be to sit in the front seat. I was the older of us, so I usually got the first turn sitting up front.

Our dad would play the Muppets and John Denver on a little, rectangular cassette player with rectangular buttons that you pressed down. He would play it when we drove up to see our grandparents at Thanksgiving, and then again a few weeks later when we went up to see them again the day after Christmas.

My parents divorced when my brother and I were very young. It is strange to me now to think how quickly we adjusted to the rhythm of splitting holidays. My brother and I always argued with each other, but there was a vague camaraderie on those chilly trips.

There was the game we played in the car to see who could count the most VW beetles- the old ones that had the trunk in front. Bathroom stops at Friendly’s where we would get hot cocoa. There was the smell of soup when we arrived late at night. Jokes about Grandpa’s fruit cake. Afternoons in the parlor with endless football games on television. There was the kangaroo story our Grandmother read to us. Our early morning excitement to find snow had fallen while we slept.

My brother does not celebrate Christmas anymore. He is gone. I haven’t spoken to him in probably five years. For a while he lived in an Otrhodox Jewish community in New York. But the voices started again, convincing him that those Jews were not doing it right. He was missing for a few weeks, then resurfaced on the other side of the country.

Every now and again, I wonder what might be the average life expectancy of a homeless schizophrenic?

There is no one else with whom I share those memories. But if I called him up to recollect, I’d get a stream of religious ideation having nothing to do with life on earth.

On our way to get our Christmas tree this year, I told my husband and kids about the Muppets and John Denver album when one of the songs played off my ipod in the car. I told them about how we would listen to it in my dad’s VW van, how the cheerful Muppet voices stole some of the freezer burn of the trek. So now they know about it, but they weren’t there. They don’t remember the click of the tape recorder, or the scratchiness of the songs because they had been recorded off a real, vinyl record.

It is dubious my brother even remembers those things. He went through a few courses of ECT to treat pervasive depression some years back, and one of the side effects of that therapy is memory loss.

They aren’t even the best memories. Some are downright scary and sad, like the time he spilled hot cocoa on his leg in the car, and it scorched through his pants, scalding his little legs with second degree burns.

Maybe these things are not worth remembering.

John Denver’s voice, clear and earnest, brings me the pleasure of what might be a happy childhood memory.

I wonder what it would be like to be a normal brother and sister on a holiday, giggling about how much Grandpa liked his fruitcake with a sliver of cheddar cheese. Why did we find that so amusing in the first place?

Before I put those memories back in cold storage, for just a moment, I am going to admit how much it really sucks that he’s not here, that he’s no longer my brother, and that his illness robbed us of the chance to sit back with a spiked eggnog and recollect as my kids played under the tree in our warm, happy home.