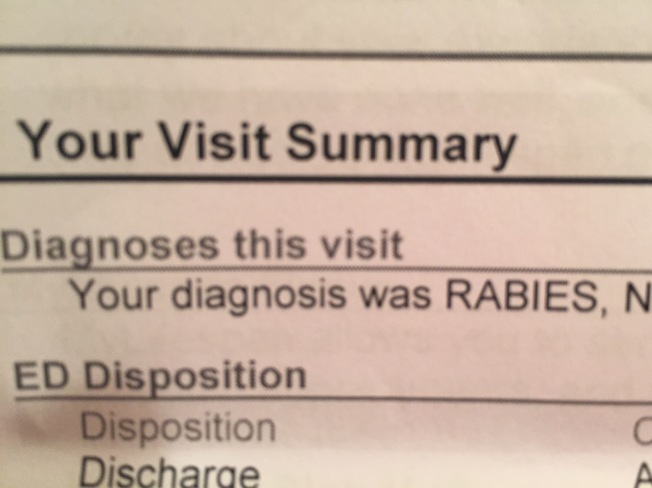 So, if you ever wanted a crash course on rabies and America’s culture of fear, here it is…

Friday night found me tired and eager to go to bed. I went down to use the bathroom, brush teeth, and then went out to the living room to say goodnight to my hubs who was watching television.

All of a sudden a small, brown bat swooped around us!

Naturally, I squealed and jumped out of my skin.

My husband calmly got up to open the front door to let the bat out. But the bat swooped back through our dining room and disappeared.  Or, I lost sight of it because I screamed like a monkey, and ran to lock myself in the bathroom.  (Yes, it is a well known fact that batwings can manipulate door handles quite well.  They are more pernicious than octopus, people.)

Over the next hour we searched high and low for the bat. We were all Mulder and Scully with flashlights and a Swiffer duster thing I grabbed to smack at the bat if it flew into my face.  The bat is out there, Scully. . .  Trust no one.

We couldn’t find it.

Long story short, my daring (and darling) husband finally located it up in a crawl space in our attic maser suite.

It is a goddamn good thing I did not marry a squeamish man, folks.

Because, it was in our bedroom, people. The bat had burrowed into the insulation in our room, under an eave, just a few feet away from where we rest our heads.

And there were piles of icky guano (bat poo) that indicated he had been in residency for a while.

Hubs couldn’t get the bat to come back out, and it was getting really late.  My adrenaline surge had succumbed to the melatonin I’d taken only moments prior to the bat showing up. I was on my way to bed, remember?

So the Spousal unit sealed up the crawl space with some tarp and duct tape. Then we hit the hay for a very jumpy and tense sleep.

The next day we worked on inspecting our eaves and then sealing stuff up. By “us,” I mean my husband did that crap.  He’s awesome like that. I’ve never been so happy I married him.  He put piles of moth balls in there, installed LED lights, and put on a radio with NPR blaring into the eave, all to discourage the bats from returning.  He reinforced certain places and secured the bat hatches, so to speak.

We went out to dinner with friend and chuckled about the bat. We’ve had bats in our house where we lived prior to this house and we let them out and got on with our lives.

It was never a big deal.

So imagine my surprise when my daughter’s pediatrician insisted we needed to call the department of health post haste.

I’d brought Emily in because she had a cough. Guano can cause respiratory illness and Em had been present when my husband was using the shop vac in the bat cave.  So, I mentioned the bat situation to the doc, feeling a sense of chagrin, and certain that she would laugh me out of the office.

The doc shuffled through a drawer to get the number.  Call now, she insisted.

Not one to be indoctrinated into a culture of fear, I waited and called the next morning, again feeling chagrin and certain that the hard working folks at the department of health would laugh at me for wasting their time with my bat story.

But they transferred me to triage.

And then triage transferred me to a nurse.

And the nurse took down all the pertinent info about my entire family and instructed us to go to the hospital for rabies vaccination.

Are you fucking kidding me, I wanted to ask?  But I didn’t.

My husband was not convinced.  He’s done a lot of reading on the subject and insists that you are no more likely to get rabies from a bat than from any other wild animal.

Yeah, I countered, but these wild animals were maybe swooping around our heads as we slept, drooling all over our slumbering bodies.

I learned that while rabies can be transferred from animal to human by a bite or a scratch, it is also transmissible just through proximity.  And drool.  So, if the bat swooped over us and just one droplet of its juicy, contagious saliva fell on us, we would be at risk.

I was scared enough to leave work early to collect my children and make our way to the ER.

Eventually, a doctor came in to explain what would happen, and he confirmed what my husband and I thought–  that the health department was being overly reactive and borderline ridiculous.

The doctor said if we lived in any other country, this would not be an issue, but for whatever reason, our state’s department of health has gotten crazy vigilant about bats and rabies.

While rabies in bats is still pretty rare, it has grown in our state over the past four years from 4% to 8%.  Rabies is 100% fatal, and by the time you develop symptoms, it is too late.  There is no cure.  This information made me 75% freaked out, and 25% annoyed, and that is where my percentages end.

It was a long wait.  We all grew tired and hungry, but I was a very proud mama bear at how well my children sat and played and handled the long wait, way past their bedtimes.

On the other hand, I got pretty punchy and wondered if the guys at the nursing station would play Grey’s Anatomy with me.  I texted my BFF to see if she thought it would be cool if I casually sauntered up to one of them and mentioned that I was scrubbing in on a craniotomy.

She texted back, LOL, go get some FOOD in you.

We sat with the kids and waited for hours until they finally came in with four trays of syringes.

And here is where it gets fun, folks:  The first round of treatment is a course of rabies vac, and a dose of immunoglobulin  (whatever the hell that is).  The immunoglobulin is based on weight, so the more you weigh, the more you get.  Super awesome!!  Since my hubs and I are “Fatties for life” (fist bump!), we got to have six shots each.

Our poor children had three apiece.

The kids went first.  Emily was psyched that she got to hold a shiny, light-up ball, and she didn’t bat an eye (no pun intended, I swear) as they plunged the medicine into her.  Not even one tear.  Damn, she’s incredible.

Jack sat on my lap and knew enough to know it was going to suck, but he was brave and got through it with merely a whimper.

It is worth noting that they no longer give the shots in the stomach. The kids got theirs in their thighs, and my husband and I got two in each thigh and one in each arm. I guess that is slightly less repulsive.

I was not so dignified as the rest of my family.

I saw them coming at me with all those syringes and got dizzy and nauseous.  They had to lay me down, and my husband held my hand through my hyperventilating, as they all coached me to breathe.  Let me tell you, I would much rather give birth every day of the week than have six needles simultaneously plunged into my flesh.

The immunoglobin was thick going in, and it burned (That’s what she said!!  Holla!!  Did you see that, I made a joke!)

After it was all done, we sat and were observed for any ill effects for fifteen minutes. By this time we were all cranky and really ready to go home. We were discharged and trudged out to our cars, decorated in what seemed like an entire box of Angry Bird bandaids.

We will have to go back for four boosters over then next few weeks.  The good news there is that we only get one shot at each one.  But the best news is that we get to pay our insurance’s hospital copay for every single one of us for our foray the other night.  $150 apiece!

Obviously I am being bitterly sarcastic about that.  Shelling out $600 for rabies medicine fucking sucks bat balls (excuse my French).  It feels horribly discouraging that we are paying what could have been enough for  a weekend away at a nice resort, or half of what it is going to cost to professionally “bat proof” our bedroom, for a treatment we likely do not need, simply because Americans love to get all scared about shit and layer on tons of cure.  But I guess that is probably another blog post there.

Right now, I am trying to focus on my family’s health and safety, and my gratitude for those blessings.  I think I will feel heaps better after I finally manage to get a good night’s sleep.  If that ever happens again. . .